A Bonbon See's the Day 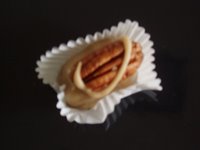 Sugar Savvy has posted my latest See's Piece by Piece. Number 15 does the unthinkable, reviews a See's Candy that contains not a smidgen of chocolate.

The Maple Bonbon is sure sweet to look at, but how will it taste? Click here to find out.

Update:  See's is stll around, but Sugar Savvy isn't.  Here's a link to the Wayback web archive which has captured the old link.
See text of post below

See�s Candies, while known for its chocolates, has a long tradition of making non-chocolate candies. Perhaps the oldest is the bonbon. This week The Chocolate Box is putting aside its prejudices to explore the non-chocolate Maple Bonbon.
Now bonbons occupy a special place in the American past. The very word conjures up images of spoiled debutantes, indulged molls and pampered chorus girls with sugar daddies reclining on poofy sofas and chaise lounges languidly eating candy confections out of a five-pound box, preferably heart-shaped.
But despite its slightly illicit 1930s movie connotations, the bonbon is actually just a candy with a center of fondant (a sugar paste), fruit, nuts or other filling that is coated with chocolate or fondant. Often the word is used to mean something sweet and frivolous. See�s seems to define its bonbons as being fondant-covered, and distinguishes them from the chocolate confections by serving them up in white frilled paper cups instead of the standard brown.
Bonbons were among See�s Candies� offerings when Charles See opened that first shop in Los Angeles in 1921. The recipe was created by his mother, Mary See, and the technique for making them hasn�t changed much since then.
According the book See�s Famous Old Time Candies by Margaret Moos Pick, first the buttercream filling is hand rolled. Then each candy is dipped into the beige or pastel tinted creamy fondant, again by hand, and, in the case of the maple bonbon, topped off by a pecan half as well as a decorative swirl.
Tasting Report
Description: A warm, pale beige color, the Maple Bonbon has a vaguely oblong shape and is crowned with a crisp pecan half and a distinctive drizzle of more beige fondant. The center looks smooth with recognizable chunks of walnuts. The center is a similar neutral beige color to the coating. These bonbons might be a little too racy for the website and catalog, because I couldn�t find them listed. But you can view them at the many See�s locations.

Taste: Before I even bit into the candy, I could smell the maple. Then as I nibbled a little bit of the outer fondant coating, I was hit with a pure maple candy taste. Just that little bite transported me back to the maple sugaring museum in Vermont I visited as a kid, where we would get a free sample that was never big enough of maple sugar candy. As a child I was enchanted. As an adult, the sugary taste of the coating became overwhelming despite its robust maple flavor.
Next I tried some of the maple walnut buttercream center. As always with See�s products, the walnuts were fresh and flavorsome. The smooth looking filling was a bit grainy but melted nicely in the mouth. It, too, packed a wallop of maple and sweet flavors. It left a sugary aftertaste that made me want to rinse my mouth out before continuing. My next bite combined pecan, coating and buttercream. The clean, nutty taste of the pecan came through and that and the walnut chunks helped to break up the solid overly sweet maple mass I now was eating. My reaction went from maple fantasy to thinking the bonbon left something to be desired and was indeed sweet and frivolous and did not belong in The Chocolate Box.
See�s Trivia: Attendees of the 1939 World�s Fair in San Francisco got to watch as white uniformed See�s employees hand dipped bonbons at the See�s candy kitchen exhibit.
Ingredients: Bonbon coating (sugar, water, gelatin, artificial colors), sugar, pecans, English walnuts, cream, maple sugar, brown sugar, corn syrup, butter, salt, milk
Well Fed Network Ratings: This is a tough one, at first bite the Maple Bonbon was a 6.5 or so as compared to other See�s Candies, but the more I ate, the more overwhelmed I was by the bonbon�s sugary taste. By the time I finished it, I would only give it a 4 or so out of a possible 10, and only that high because of the really full, rich maple taste and the tasty pecan half. Pro: Real maple taste and the nuts. Con: Almost painfully sweet. Not much contrast in flavor (or color) between coating and filling.
Posted by FJKramer at 11:02 PM

I must disagree. I just tasted this candy for the first time today after a lifetime of See's Candy consumption and it became a fast favorite! I could eat them all day long I think. Delicious!