Aw, Shucks -- Corn From the Cob to the Soup Pot 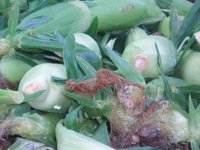 My husband has a taste for farm stands. Not any farm stands, but only those selling locally grown, in-season fruit and vegetables. The sight of corn back in the stores reminds me of last summer. We were returning from the Sierras through San Joaquin County in California when he spotted a new (to him) farm stand. After a quick u-turn, we parked, climbed out of the air conditioned car into the baking hot Central Valley summer and checked out what the stand had to offer.

The farm stand checked out. Among its offerings were pale green mountains of fresh, sweet corn. I picked out six likely looking ears. The young salesgirl told me it would be cheaper if I bought a dozen.

“You could always give them away,” she said as she took my dollar. I was skeptical about taking all 12, but just the six ears would cost me $1.50, so I picked out six more, wondering how fresh they could be if the stand was pricing the corn like this. Now I wish I had bought three dozen.

The corn was sweet and fresh and the yellow cobs dotted with an occasional white kernel. It was so hot I was afraid the delicate corn would pop in the car on the way home, but it survived fine.

That first night, I stripped four ears of their silk and thin inner husks, wrapped them up in the remaining outer husks and soaked them for about a half hour in water. I then plopped them onto a hot barbecue where I roasted them, turning occasionally until some of the kernels had blackened and when I slit one with my fingernail, it cut open easily and a bit of juice ran out.

I removed the corn from the grill with tongs and used oven mitts to protect my hands as I stripped the hot and ashy husks off the ears. We feasted on corn with chipotle hot sauce and squirts of lime juice. That’s when I made the decision, I would be keeping – and cooking with – all the corn.

The next night, I turned our leftover grilled chicken into fajitas. I shucked and cut the kernels off a few ears and put them in a preheated, dry frying pan in one layer. I let them pan roast a bit and gave the pan a good shake and continued like that until a few of the kernels began to brown and I could smell the aroma of roast corn. I added chopped bits of red pepper and red onion and a bit of water. I stirred until the pepper and onion had softened a bit and added salt and freshly ground pepper to taste.

It made a tasty side dish, but I was sorry I hadn’t added a handful of the fresh corn kernels (which were sweet and juicy raw, not the least starchy) to the homemade tomatillo salsa I had served with the fajitas.

The next night, I still had leftover grilled chicken, so I turned it into a Thai peanut sauce stir fry. I again cut the kernels off a cob of corn. The raw kernels were still sweet and milky and I combined them with a large peeled and thinly sliced cucumber into a Thai vegetable salad, with a dash of salt, a grinding of fresh black pepper, a sprinkle of red pepper flakes, a handful of chopped fresh cilantro, a drizzle of Asian sesame oil and a very healthy splash of seasoned rice vinegar.

With the remaining ears, I made a summer corn soup.

This recipe depends on the freshness and flavor of your vegetables. The taste of the stock you use is also important. I used homemade, but a good quality store bought would also work.

Add stock and simmer until vegetables are cooked but not mushy. Taste. Add salt, pepper and hot sauce or red pepper flakes (if using) to taste. Puree, using a hand blender (or in batches in a regular blender and then return to pot), about one fourth to half the soup depending on how thick you’d like it to be. (Be careful, soup will be hot).

Can be served warm, room temperature or cold. (If serving cold, taste again and adjust seasonings before serving. You may need more flavoring.)

Optional: just before serving, swirl about a tablespoon of basil pesto atop each bowl.
Posted by FJKramer at 8:55 AM

Email ThisBlogThis!Share to TwitterShare to FacebookShare to Pinterest
Labels: Soups and Stews

That sounds wonderful! I just bought some corn for 20 cents each at the supermarket here in CT. I was skeptical at first, but I had to get that first taste of summer. They were delcious--sweet, juicy, milky. I am going back for more tomorrow.