Pumpkin Redux -- Be A Pumpkin Eater

Here are two posts from last year on pumpkins that deserve a reprieve from the archives. The first is all about pumpkins, the second recipes for a pumpkin treat and a pumpkin chili. The posts won last year's Editor's Choice award in Slashfood's Great Pumpkin Day competition. 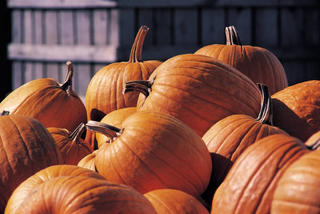 PUMPKINS have long had a culinary fascination for me, particularly around Halloween. It started when my father would recycle our jack o’lantern into pumpkin pie complete with a homemade crust. It continued after college with my almost ritual serving of a rich, custard cheese casserole prepared inside a pumpkin shell at Halloween. When my kids were younger, my creativity flourished as I helped to create such pumpkin favorites as surfer dude pumpkin and diaper baby pumpkin (my kids were not that into scary, I guess.) Now, I tend to explore the many high fiber, low calorie variations pumpkins provide.

IN A PUMPKIN SHELL – Weight watchers tend to really be excited about pumpkin’s lack of calories not to mention fat. The thrill could be because of its association with pie and whipped cream. Four pounds of whole pumpkin (with seeds and peel) will equal about two pounds of raw flesh. One pound of raw, peeled pumpkin yields about four cups of chunks or two cups of cooked puree. I’ve cooked with both fresh and canned and there is no question fresh is better, but canned puree is a quick, healthy convenience food. Just look for cans containing only one ingredient – pumpkin – and avoid those labeled “pumpkin pie filling.”

TRICK OR TREAT – The bad news is that most of the pumpkins you see in the market are field pumpkins, great for jack o’lanterns, a bit stringy and watery for eating. Look for “sugar pie” or “cheese” pumpkins or any other variety labeled “cooking pumpkin.” Sugar pie is probably the most readily available. Check with your local produce market or manager for availability. The cheese pumpkin is reputed to be the pumpkin first canned for pumpkin pie. Cooking pumpkins have a denser, sweeter flesh than field pumpkins. No matter what kind of cooking pumpkin you use, select one that is bright orange and seems heavy for its size with its stem attached. Whole pumpkins keep a month or more if stored in a cool room. Raw chunks can be refrigerated for a few days and cooked puree freezes well.

USER’S GUIDE – To prep a pumpkin, start like you are going to make a jack o’lantern. Cut open at the “lid.” If you are going to peel the pumpkin to use raw or to steam, use a sharp knife and trim away the outside peel, then cut the pumpkin shell in half vertically. Leave the skin on if you will be baking the pumpkin. Scoop out the seeds and strings with a tablespoon. To use raw, cut in chunks and add to soups, stews, sautés, curries and chilis. To use as a puree, choose steaming or baking (which I think results in a sweeter, less watery puree). For steaming, cut in 1 ½-inch cubes, place in steamer basket over boiling water and steam for 15-20 minutes or until tender. Drain well before pureeing. To bake, place pumpkin halves cut side down on an oiled baking tray. Bake at 350 degrees for until the pumpkin flesh is tender when pierced with a fork. Discard peel before using. One advantage of making your own pumpkin puree is that you can make it as fine or chunky as you like. I like a bit of chunk in most recipes for texture. Pump up vegetable soup by adding one to two cups of pumpkin puree along with some fresh minced ginger, a pinch of red pepper flakes, a half teaspoon or so of coconut extract and possibly some leftover, chopped steamed greens and two tablespoons of smooth peanut butter.

THE PAYOFF -- Two favorite recipes that should suit both Jack Spratt and his wife.

PUMPKIN TREATS – Make these as custards or as mini-pies. Either way they satisfy that pumpkin craving. Make them richer by substituting low-fat or regular evaporated milk and serve with a dollop or two of whipped cream. These are not too sweet and depend on the spices to temper the pumpkin’s natural astringency. My inexact calculation puts both versions in at about 100 calories per serving.

· Combine and mix all the filling ingredients in a medium bowl.
· For the mini-pies, line 12 cupcake tins with FOIL liners (the filling’s moisture will seep through paper liners). Place a gingersnap in the bottom of each tin and fill each about 3/4ths or a bit more with the filling. Bake in a preheated 375-degree oven about 25-30 minutes until the center feels firm and not sticky and a knife comes out clean. Serve warm (not hot), room temperature or cold. Store in the refrigerator. Makes 12 treats. Serving size is one mini-pie. Enjoy within a day or so.
· For custards, pour filling in 4 heatproof baking or custard cups. Place cups in a large baking pan, add about one inch of boiling water to the pan to surround the cups (you are making a water bath or bain marie to prevent the custards from cracking.) Place in a preheated 325-degree oven for about 50 - 70 minutes or until a knife inserted near the center comes out clean. The timing really varied in my test runs, so check at 50 minutes, but be prepared to cook them longer. Remove cups from water. Serve warm or cold. Makes four servings.

PUMPKIN CHILI – This recipe is hearty, filling and is probably what I’ll serve on All Hallows Eve.


Heat oil in large, deep pot or dutch oven. Add onion and sauté until softened. Add garlic, jalapeno or serrano chile(s), bell pepper, celery and carrots. Stir often and cook until softened a bit. Add turkey and sauté until brown. Add chili powder, cumin and oregano. Add mushrooms and sauté mixture a minute or two. Add pumpkin chunks, tomatoes and liquid, tomato paste, water and/or stock, and the chipoltes. Cook covered, stirring occasionally until pumpkin begins to soften. Add beans, stir well, replace cover and cook for about 20 minutes or until the pumpkin is almost cooked through. Take the cover off and simmer until pumpkin is done and the chili is thickened (about 3 to 5 minutes). Using a fork and without removing the pumpkin from the chili, mash about a half cup of the cooked pumpkin chunks into the chili into a rough puree (this helps give the chili body). Season with salt and pepper to taste. Sprinkle with chopped cilantro. Serve with chili toppings. About eight or more servings.
Posted by FJKramer at 8:53 AM

I remember the disappointment with a pumpkin pie made from a jack-o'lantern pumpkin a few years ago. I swear that field pumpkins are even more watery and stringy than they used to be! After that year, I bought a pie pumpkin to use as the jack-o'lantern. It made great pie but it was REALLY hard to carve for Hallowe'en night. And doesn't it look amazing as it bakes? I love how the pumpkin's face gets so distorted.

What a good idea to put pumpkin into chili con carne!