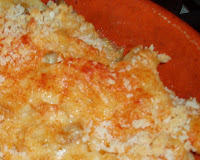 Who doesn't like mac and cheese? I know my family loves it. I started making it from the "blue box" for myself when I was in college. For an extra special meal, I would stir in a can of tuna.

When I went from hot plate cuisine to a real kitchen, my Kraft blue box days were behind me, but so was macaroni and cheese. I graduated to gnocchi and pesto and other pasta combinations. Once I had kids, however, I was back in the mac business big time.

At first, I made mac and cheese from scratch with browned onions and gourmet cheeses. After enough of these calorie spectaculars had taken up residence in my arteries, I began experimenting with lower fat versions. My oldest was a toddler then and ate them all happily. Then he went off to preschool and began raving about the mac and cheese he had at lunch there.

The next day I called the school's director. She heard my request and laughed.

"It's the kind from the blue box," she said.

That was it, the oldest wasn't having any mac and cheese that wasn't Kraft's. Store brands never cut it for him. It had to be the fluorescent orange, salty and slightly chemical tasting glop from the blue box. The youngest never had a chance. The blue box dominated our pantry from before he was born. The oldest's taste did mature, he did flirt with an white version that's no longer available and he now prefers the Velveeta and Shells version, but when he has to make it for himself at the dorm, it's the microwave Easy Mac blue box variation he reaches for. The youngest, who is a bit of gourmet, still astonishes me by insisting on a supply of the blue boxes on the shelf "just in case."

Here is a link to a post I wrote for Paper Palate on the March 2007 issue of Vegetarian Times. In it I give my adaptation of the magazine's cover recipe for macaroni and cheese. It's full of flavor, fairly slimmed down in fat and calories, and is the baked kind with lots of those nice browned and crusty patches. I added some heat with the addition of green chiles, but they are optional.

The recipe serves eight according to the magazine, but realistically I'd say it's six dinner size portions. We had lots left over and it was delicious either reheated in the microwave or cold straight out of the fridge.

If your family likes a creamier, unbaked mac and cheese, make sure any vegetable additions (if using) are well cooked when you combine them with the mac and cheese mixture, mix in the additional cheese reserved for the topping and skip the bread crumbs and baking steps. It beats the pants off the blue box any day. Unless you are my kid, anyway.

Update (9.30.12) Paper Palate and Well Fed are long gone (and someone else has claimed the paperpalate.net url) but thanks to the way back machine you can see the post here.

The March Vegetarian Times features a nice assortment of recipes for those times when you still want comfort food for the cold and times or when you are looking forward to spring’s bounty of fresh vegetables. You can check out the table of contents here.
In the comfort category, put recipes for Garlicky Grits Cakes with Red Pepper Tapenade, Decadent Chocolate Mousse, Cornmeal Waffles with Warm Peach Sauce (made with frozen peaches), and Macaroni and Cheese.

This month’s features include new recipes from old Ireland with veggie takes on Colcannon and other standbys. Other features in March highlight low-sugar fruit desserts, elegant party ideas and recipes, potluck suggestions including a luscious-sounding Tangerine-Glazed Carrot Cake, and “The Next Wave” about five “up and coming vegetarian chefs.” The one ingredient five ways feature is on peanut butter, with recipes for an African soup, tofu satay, sweet potato curry and Napa cabbage salad.

Up until the time I went to the kitchen to cook, I thought I would sample the Individual Carrot Souffles recipe, but when I grabbed the magazine and headed toward the refrigerator to pull out the ingredients, the cover photo of a very inviting dish of good old mac and cheese just looked so tempting that I decided to make that instead.

So here’s my take on the March Vegetarian Times Macaroni and Cheese recipe. The magazine’s recipe is “slimmed down” but full of flavor. It is part of its five-ingredient feature, but I’ve added a few more (which I’ve noted). The original recipe is part of a feature called “Quick Comfort” by Myra Kornfeld.

This recipe is adapted from one in the March 2007 Vegetarian Times. (The notes in the original recipe recommend mixing in chopped green onion and sprinkling bread crumbs on top although they did not include those ingredients or their amounts in the actual recipe or the nutrition breakdown.)

10 oz. (about 3 cups) medium elbow macaroni (or other shaped pasta)

Salt and pepper to taste

Preheat oven to 400 degrees. Cook pasta in boiling water until done but still firm to the bite. Drain. Set aside. Over medium heat, melt butter then add the flour, stirring and cooking for a minute. Add milk and cook until thickened, stirring constantly. (Vegetarian Times says this should take six minutes, my batch took a bit longer.) Remove from heat, stir in 1 ½ cups of the grated cheese. Season with mustard, salt and pepper. Combine sauce with noodles, add in optional chopped chiles or onions, and mix well.

Bake 45 minutes (check early, mine was done at 40 minutes) or until top is crisp and has started to brown. Let rest 10 minutes before serving. Serves 8.

Vegetarian Times’ version (without the breadcrumbs, chiles and additional seasoning) has 269 calories and 11 grams total fat, according to the nutrition information provided by the magazine.

How did it turn out? The top was nice and crunchy with plenty of crispy bits. I liked the sharp taste of the chiles offsetting the richness of the cheese and blandness of the pasta. The texture was on the firm side. If you want a creamier mac and cheese, you might make a bit more white sauce to mix in or thicken the sauce a bit less to begin with.

Overall, it was easy and tasty. I plan on trying it again and experimenting with different vegetable mix ins.
Posted by FJKramer at 10:35 AM

How funny! I wrote a post waxing nostalgic about mac and cheese from the box around the same time. I'll have to try your recipe. The addition of hot chilis is intriguing!