Crisps (or Chips) Ahoy -- Lobster and Other Flavored Potato Snacks 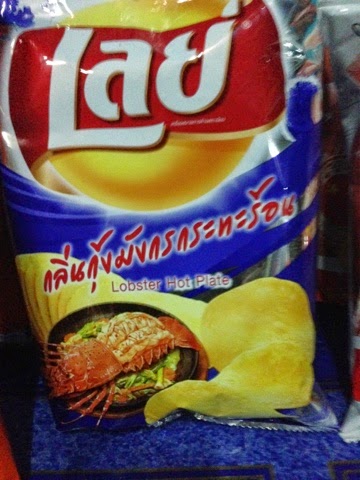 The availability of snack food, or processed ones in general, varies throughout Southeast Asia. But one junk food seen almost everywhere is the potato chip (called crisps in much of the world). While they have the standard salt, salt and vinegar and barbecue flavors the ones in SE Asia also feature lots of seafood seasoning such as shrimp, squid, and lobster (shown above).

Other flavors I've seen are chili, seaweed, and rosemary. Friends tell me of one in Thailand with two flavors mixed in one bag -- lobster and cheese.

Leave a comment below with any exotic chip flavors you may have spotted on your travels.
Posted by FJKramer at 7:27 PM