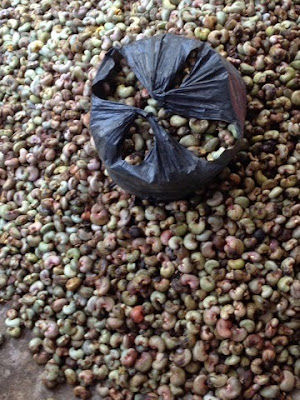 Piles of ripe, unprocessed cashews in the market in Nam Cat Dien, Vietnam.

These nuts (technically seeds) grow beneath a dupe or false fruit.  The false fruit falls off and the cashews are harvested, the skins and shells mechanically removed due to toxins and then the seed itself undergoes some heat treatment to get rid of the poison ivy-like chemicals (yes, even the ones sold as raw.)

In some countries the cashew apple is used as a fruit (it is astringent and can irritate some folks).  In others it is fermented into a wine or made into a liquor.  I saw it as a fruit in Vietnam and tasted some vile liquor made from it when I was in southern India.

Vietnam was the world's largest grower of cashews in 2012. I also show plantations of the plants with their colorful cashew apples in northern Cambodia, where they (and rubber trees) were being planted to reforest the deforested jungle and forest areas. 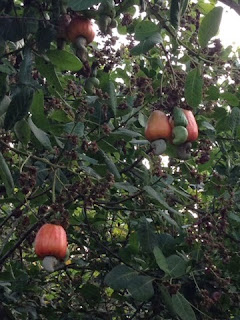 A note: due to Google Blogger mobile inadequacies photos aren't laid out exactly how I'd like them and you, the raeader, are used to, but once I return home I'll clean everything up.