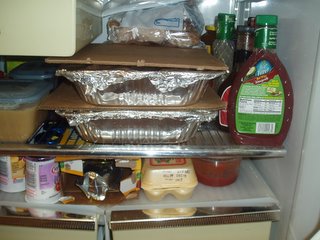 Last week's soup wasn't my most successful at first, in fact it needed quite a bit of amendments before it was pronounced soup.

This was a fridge clean-out soup and it does demonstrate how flexibility saved the soup.

My key inspirations were 1 pint wrinkled cherry tomatoes and half a medium-sized bag of dried out peeled and shaped carrots. (Note: chop up the carrots first otherwise they take forever to soften.) I also had bought some Oxo Indian Herb and Spice bullion cubes which I thought I would give a try.

I sauteed a half chopped onion and two minced cloves of garlic in olive oil. Added the tomatoes and carrots. Let that brown a bit, then added about 8 cups of water and the bullion cube and then let it simmer until the carrots were soft. I then used my immersion blender to puree until relatively smooth.

I tasted it at this point and wasn't satisfied. (Actually, I thought, yikes, there are way too many carrots in this!) I then added a box of chopped frozen spinach from my freezer and a healthy dose of curry powder, a pinch of ground ginger and a good slug of my own Below the Belt Hot Sauce (see info on post below). Better, but not quite soup yet.

I drained and rinsed off a 15 oz can of large white beans, added them to the pot. The next taste was it! I seasoned everything with lots of sea salt and freshly ground pepper and called it soup.

It wasn't a pretty process, but it sure was a tasty soup!

FYI - The photo is not actually of my overstuffed fridge, which prompted this soup, but of my sister's after our Thanksgiving meal. But you get the idea.
------
Resources:
Oxo, recipes and product info: http://www.oxo.co.uk
Below the Belt Hot Sauce: http://clickblogappetit.blogspot.com/2005/11/hot-stuff-at-farm-stand.html

Email ThisBlogThis!Share to TwitterShare to FacebookShare to Pinterest
Labels: Soups and Stews