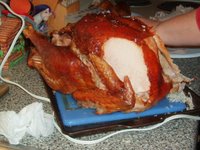 Blog Appetit and family spent the last big holiday in suburban New York with family. It was not a big foodie adventure.

First off, I felt like part of a chain gang. Partly because of the presence of the distinctly non-foodie older son, largely for convenience, we ate in a lot of chains -- Dunkin Donuts, Starbucks, TGIF, Ground Round (a regional chain that used to be a funky hamburger pub with free peanuts and lots of peanut shells on the floor, but is now the peanutless home of chicken Caesar wraps in colored tortillas) and the Hard Rock Cafe. (That was where we had our one meal in Manhattan. The ahi tuna sandwich with wasabi mayonnaise wasn't half bad, though.)

Thanksgiving itself featured a beautifully bronzed bird (which I almost forgot to take a photo of, hence the missing slice), home grown vegetables and a fridge full of leftovers for my sister.

Besides the chain food, my other disappointment was the lack of hot chestnut vendors the day we were in New York City. True, we were only in a few neighborhoods and the weather was only chilly and not freezing, but still, I wanted my brown paper bag full of hot chestnuts tasting slightly sweet and nutty with just a hint of acridity where the shells had been blackened on the bottom.

I did get teased by that smoky smell of charcoal braziers which always makes me think I've stepped back in time, haggling with vendors swathed in mismatched padded layers, wearing peaked caps, speaking strange languages and with calloused fingers poking out of knit gloves. But the pushcarts were selling hot pretzels and shish kabob. I wasn't tempted by the dried out pretzels and I just couldn't try the skewered street food, for hours earlier I had just tasted the Middle Eastern grilled food I have ever eaten.
(To Be Continued ...)
Posted by FJKramer at 3:58 PM