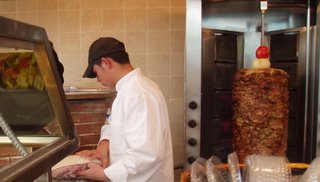 On our way in to Manhattan, we made a detour in Queens to an orthodox Jewish neighborhood. My younger son wanted some Judaica and a relative had recommended a shop he knew.

After Noah had made his purchase we wandered around the area. Even though we are Jewish, we are not very observant and the businesses that served the community seemed somewhat foreign and exotic to us. After a while, I wanted a snack. One restaurant in particular seemed enticing and we went in.

Grill Point is an Israeli-run restaurant serving all manner of Middle Eastern grilled and "kabobed" food. Pretty much if you could put it on a skewer and it met with the Jewish laws of kasruth (kosher) they had it.

The restaurant, which seemed a combination of fast food and full service, was filled with a mix of people from the surrounding community. The smell of the grilling meat was making our mouths drool, we couldn't wait to order. Then we realized the restaurant made its own pita bread to serve with the meats and the bread our kabob would be wrapped in would be pulled hot off the inside of a vase-shaped oven that reminded me of those used to make tandoori and naan. By this time, our anticipation was overwhelming and when the food was handed over to us we just basically attacked it. (The photo above shows a cook forming the pita bread to go into the oven which is in the counter where he is working and a hunk of rotating lamb and turkey shuwarma (something like a gyro.)

The adana kabob, made with ground beef and Middle Eastern flavorings, was great, but the pita bread was awesome. We chose to pay the extra $1 for lafa, more of a flatbread than a pocket bread. Thicker than commercial pitas, it was blistered black in spots and had a chewy yeastiness about it that was divine. 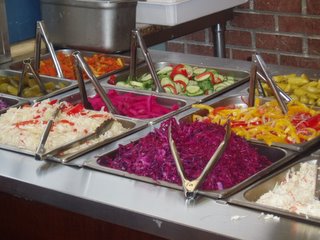 We didn't quite understand the ordering process, so we missed out on the vegetable salads, but since we were just after a snack and weren't really that hungry, our sense of loss was not as overwhelming as it otherwise would have been.

Grill Point is not the most convenient restaurant to get to in New York, but it is definitely worth a detour. If you do go, look around the small neighborhood. There is a bakery, a bagel shop, and a spice shop featuring burlap bags full of Middle Eastern herbs and seasonings. Plus a very nice shop with a friendly staff for buying Judaica.

Note: Grill Point is closed from Friday afternoon until Saturday after sundown.
Posted by FJKramer at 11:14 PM

Sounds like a place I would visit all the time if it was in my neighborhood. Hope you're having a nice holiday. I've enjoyed reading your blog.

Everything looks so fresh and colorful - great picture!

Your review is making my mouth water, and I live in that neighborhood! Hope you'll come back and visit our neighborhood again. Make sure to try the Blooming Onion at Dougies (also on Main Street), and the pretzels at Pretzel Place on Main & 76th. Not to mention all the pizza shops....