Helping Out at My Local Food Bank 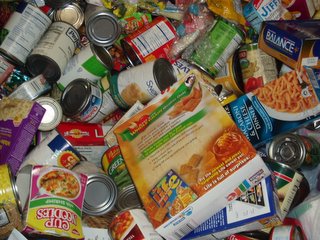 Yesterday the oldest son and I volunteered a few hours at the Alameda County Community Food Bank (ACCFB). This is something I do periodically, but this son had never done before. We worked a three hour shift sorting through bins and barrels of donated foods to help make up boxes of food to be given to about 300 agencies feeding about 120,000 folks. Some of the agencies repack the food and give individual grocery bags to clients, others just hand over the box. (The photo above shows the contents of a typical bin of donated food.)

Since I know that many people will need to eat for the week what is inside each of these boxes, I take packing each box very seriously.

We were told to pack two rows of cans on the bottom of the box and fill it up to the top with "soft" goods such as rice, noodles, cereal boxes and the like.

My technique was to "dive" into the bins and barrels searching for protein such as beans, canned tuna or chicken, canned ham and other meats, peanut butter and spaghetti sauce with meat. I would try to make sure that each box got at a variety of these. Then I would fill the rest of my can allotment with canned fruits and vegetables, again trying for an assortment. I was really aware of what I would feel like opening a box and what my reaction might be. Then I filled in the soft goods, making sure there was pasta for the sauce, rice for the beans, etc. Sometimes I would run across a cake mix. I would set it aside until a can of frosting popped up in my search and then I would put both in the carton. I hoped whomever got this box would enjoy the treat and have a way to make the cake and that my giving them cake did not take up space that could have gone to food they would have wanted more.

In the three hours the 18 or so of us volunteers packed 9 pallets full of boxes to go to the agencies, each weighing about 1,200 pounds. 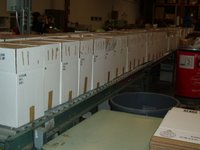 (The photo at right shows some of the empty boxes that greeted us as we began our shift.)

I was acutely aware that I had spent a significant portion of my time just a few weeks ago wandering around the bounty of the Fancy Food Show and how I spend so much time working on Blog Appetit and writing about food that I almost take it for granted.

Working at the food bank really brought me back to reality about hunger here in America. I am not going to take the time to research the statistics, but believe me that hunger is very real and no matter where you live, there are people near you who depend on the services of a food bank.

Please donate funds and your time to your local food bank. You can go to to find the agency nearest you through America's Second Harvest organization .

Please donate food whenever an opportunity presents itself. Please don't use the food drive as an excuse to empty out your pantry of exotic foods you never got around to using, ancient cans, food without labels, anything that is not sealed or individually wrapped (with ingredients on the wrappers), baby food or formula (which the food banks are not allowed to distribute), or anything you probably wouldn't want to eat yourself. I can't begin to tell you how much we had to throw away (which cost time and money for hauling services) because well-meaning people just didn't realize this.

Here are my suggestions for general guidelines for foods to donate (click here for a list of foods recommended by the ACCFB. Needs in your area might differ):

Proteins: Canned beans, tuna, peanut butter, canned chicken, canned corned beef and other meats, spaghetti sauce with meat, cans of meat ravolis and spaghetti with meatballs, boxes of macaroni and cheese (packed in soft goods layer), cans of soup, especially those with beans, chicken or meat in them. Check to see if shelf-stable tofu is wanted in your area.

Vegetables and fruits: Cans of spinach, green beans, carrots and mixed vegetables. There was a ton of canned corn and peas, which are fine, but I worried about all the carbs and tried to make sure the vegetable assortment was varied. I saw a few cans of potatoes, which seemed like a good idea as a quick side dish. There were lots of cans of sweet potatoes and cranberry sauce, probably left over from the holidays. Canned applesauce (not the little plastic cups), fruit cocktail, pineapple and mandarin oranges are all a good idea.

Soft goods: Bags of rice, pasta and beans are great. So are boxes of cereal and oatmeal. I saw a number of small boxes of cornbread mix which seemed like a good idea. There were a few five pound bags of flour, large boxes of cornmeal and bags of sugar. I didn't want to pack these in anyone's boxes since they took up so much room that meant they wouldn't get other foods. I left these for the food bank to distribute to soup kitchens and other food-serving agencies.

It was hard work and I was tired at the end of my shift, as was my son. But we both felt like we had accomplished something. I hope you will consider helping out at your local food bank sometime soon.
Posted by FJKramer at 10:27 PM