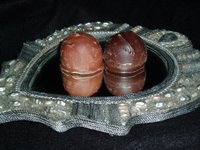 If this is Friday, it must be Sugar Savvy time again. Well, actually it is still Thursday night, so I'm writing this a few hours ahead of myself because of a busy schedule.

Anyway, the third in my dissection and delection of See's Candy Piece by Piece will be here by the time most of you read this post. Please click over to Sugar Savvy's The Chocolate Box feature to check out my discussion on Chocolate-Covered Cherries. I think my expose of this confection may surprise you.

Some of you have emailed me asking if I need See's tasting assistance. Well, no, I don't. This is a one palate job. However, I could use some recommendations about what See's pieces you'd like to have me write about in the next few weeks. Any favorites you want to share with the world? Any flavors you've been curious about but too timid to try yourself? Anything from See's you want to dare me to eat? Need inspiration, check out See's list of pieces. Leave me your suggestions as comments below and I'll do my best to include them in The Chocolate Box.

Update: Sugar Savvy and Well Fed are no more - But thanks to the Wayback archives you can see the original post as part of the page here:

Today’s Chocolate Box investigates the many mysteries of the chocolate-covered cherry, which is somewhat like the ship-in-the-bottle of candies. I’ve always wondered how they got that liquidy center around the cherry and inside the chocolate casing. It is rather amazing given my long-held intellectual confectionary curiosity (plus my late mother’s devotion to this treat) that I had never had a See’s chocolate-covered cherry before. To be truthful, I probably won’t ever have another. I couldn’t be more disappointed.
Tasting Report:
Perhaps because of its fragile nature, this piece seems to be available only in See’s shops and not from the internet or mail order. Sugar Savvy’s photo may be its only known sighting outside its native habitat.
Description: High domed, sitting proud and Rubensesque in their frilled cups, the outlines of their cherry stems just visible underneath their chocolate robes, both the milk and dark chocolate-covered cherries seduce with their sensual shape plus the promise of chocolate AND cherry. If a chocolate-covered bon bon could sit on a chaise lounge and eat chocolate-covered bon bons, this is the candy it would eat. (More on what a bon bon really is in a future Chocolate Box.)
Why Chocolate-Covered Cherries: Perhaps I longed for a Proust-like experience of recreating the tastes of youth, maybe it was the hoopla surrounding National Chocolate-Covered Cherry Day this past January 3, but when I spotted these beauties in the See’s display case not-so-innocently sitting on their glass pedestals, I knew they would be appear here in The Chocolate Box.
Secrets of the Cherry: There is probably an art to eating a chocolate-covered cherry and not ending up a smeared, drippy mess. Maybe a quick tilt back of the head with a fast bite, suck and chew, pulling back and slanting the now open cavern of half-eaten candy up like a child’s tippy cup so as not to spill its cargo of cherry and liquid and fondant. However, this after-the-fact analysis did not come into play during this tasting. I kept a napkin handy and made sure there were no witnesses.
A chocolate-covered cherry is generally constructed of a maraschino cherry core, surrounded by sugar fondant (a sugar candy paste) and then carefully covered in chocolate. Then they are left to “ripen” so that fondant can liquefy around the center. Some chocolate-covered cherry makers proudly announce that their centers are entirely liquid (well, except for the cherry), others are mum on their liquefaction factor, and still others have tempting pictures clearly showing vestigial fondant. I have no documentation from See’s of what the company’s position is on this vital issue, but I have photographic proof of incomplete fondant liquefaction.
Taste: Was my disappointment a case of "you can’t go home again"? I don’t think so; I actually like maraschino cherries and eat them a few times a year without worrying much about red dye number 40. I eat real sugar all the time. And I’ve been known to eat chocolate before. I just hadn’t been around the dance floor with a chocolate-covered cherry in a while, but I thought I still knew the steps. I was wrong.
I tried the milk chocolate candy first. I was out of practice and flubbed my first bite. The chocolate shell splintered in my mouth before I was ready, the sugary filling gushing out before I could properly get a bite out of the cherry. I was flustered and could not get the nuance of the candy. I went in for the second bite, prepared for the quick shatter of hard chocolate and the spill of liquid, ready to nip off a piece of the cherry center. Sweet success, as in the candy was sweet. Way too sweet without much cherry taste. All I could taste was sweet, perhaps because of the still solid fondant that remained behind to melt on my tongue while I chewed and chewed through the toughened skin of the cherry.
I decided to drink some tepid water and rinse my mouth out before I tried the dark chocolate-covered cherry, I wanted to give these chorines of the chocolate box a real chance to shine. I had the hang of how to eat these babies now, and I went in for the taste. The dark chocolate cherry candy was better. The dark chocolate itself didn’t seem so sweet so the experience wasn’t as cloying. There was more balance, but the cherry gave me a lot to chew on and the overwhelming taste was still just sugary.
Free Sample: Mayfair (a trademarked name), which coincidentally also features maraschino cherries in its filling.
Ingredients: Dark or Milk Chocolate Coating (see ingredients list here), sugar, cherries (with artificial color red #40), artificial flavor, invertase (an enzyme that converts sucrose to fructose and glucose and is therefore part of the process responsible for turning the fondant into liquid), cornstarch, and artificial color red #3. This differs from the more “natural” ingredient profile of most of the other See’s chocolates.
See’s Trivia: The company produces 800 million pieces of candy a year using 1.4 million pounds of butter, 4 million pounds of fresh heavy cream, 7.5 million pounds of pure cane sugar and more than 10 million pounds of Guittard chocolate, according to the company’s book See’s Famous Old Time Candies, by Margaret Moos Pick.
Bonus Maraschino Cherry Trivia: Microsoft’s Encarta Dictionary defines a maraschino cherry as a “syrupy cocktail cherry” and as “a bright red cherry preserved in a sweet syrup flavored with maraschino or an imitation of this, used especially as an addition to cocktails or to decorate cakes.” Maraschino is a liqueur or cordial distilled from marasca cherries, a type of sour cherry.
Well Fed Net Ratings: As compared to other See’s candies, I would regretfully have to give a milk chocolate-covered cherry a 1 out of 10. I would give the dark chocolate-covered cherry closer to a 4. Pro: The dark chocolate worked better with the candy’s innate sweetness. Con: Chewy, chewy cherries and sugary, sugary taste not balanced with other flavors.

Don't be shy, tell me what I should try? Buttercreams your thing? Nuts? How do you feel about mocha? Raspberry or strawberry cream. How about those pastel bon bons? Here's your chance to get your piece reviewed.

Link broken, try this link to see the article
http://sugarsavvy.net/2006/02/03/the_chocolate_box_see_s_piece_by_piece_3/