Seeds of My Heart -- Pomegranates -- Part One -- Everything But the Recipes 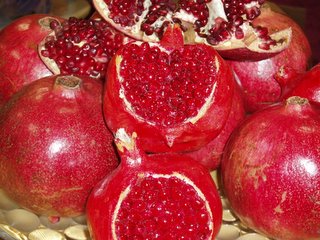 A few nights ago we celebrated Tu B’Shvat, or the Jewish celebration of the first fruit from the trees. One contemporary way to mark this holiday is with a special meal with a special order to eat these fruits, or a seder. The first type of fruit in the seder I attended was those that have their shell or skin on the outside. The symbolism is that these fruits use their covering as protection, but once you discard the peel, you have the true fruit. They wear their defenses on the outside and are compared to children who need their parents’ protection. Pomegranates are one traditional fruit in this category, oranges are another. (Jewish tradition also holds the pomegranate has 613 seeds, one for every mitzvah or commandment of the Torah and as such is a symbolism of righteousness. I don’t know anyone who has ever actually counted, however.)

It seems to me the rounded, grapefruit-sized pomegranate is the Hummer or Sherman tank of defensive fruit. Not only do you have that tough red hide to deal with, there are all those pesky (but tasty) edible seeds (or arils) to dig out of the honeycombed cells or membrane, which must be nature’s idea of Styrofoam to protect its delicate and tasty cargo. And the juice. Red wine has nothing on the staining power of pomegranate juice (which is laboriously extracted from the red pulp surrounding the seeds). The red color of the fruit (there is a white-skinned version which has paler arils, by the way) and its juice are responsible for the name of the color garnet and the island of Grenada is named after the French and Spanish words for pomegranate. Hand grenades are said to be named after the fruit’s shape and interior fragmentary nature.

The taste of the pomegranate calls for some bravery, too. The fruit and juice can range in flavor from sweetly tart to pucker power.

If the physical aspects of the pomegranate don’t seem daunting enough, there are the mythological ones.

In Greek mythology, we have winter because Demeter’s daughter, Persephone, was kidnapped by Hades. Demeter, goddess of the earth, mourned and all the crops failed and the earth was dark. Before Hades released Persephone from the underworld, he tricked her into eating six pomegranate seeds, so she had to return to the underworld for half of every year, which is one explanation for the seasons.

Others also have incorporated pomegranates into their teachings. According to Wikipedia, the ancient Egyptians were buried with pomegranates. The Babylonians believed chewing the arils before battle made them invincible. The Koran mentions pomegranates twice as examples of the good things G-d creates and once as a fruit found in the Garden of Paradise.

There is also a lot written on the health benefits of the pomegranate. They are high in vitamin C and antioxidants, a virtual hand grenade against free radicals.
For generations, the only way to get to the seeds and have the juice was to attack the pomegranate when it wasn’t looking, hoping not to have your hands stained like some thief who unwittingly steals an exploding pack of dye mixed in with the bank’s money. I’ve read of the rubber glove approach, the bathtub approach and others to opening up the pomegranate’s hidden vaults. Then, after you picked out the seeds, you need to extract the juice from the thin pulp covering them. It is this juice, which squirts and sprays and just plain leaks out all over as you prick out the seeds, that creates the powerful red stain, so permanent that it was used in antiquity as a fabric dye.

For years, I would shop in Middle Eastern stores to buy bottles of pomegranate juice, syrup and molasses (concentrated juice). I used these in different sweet-and-sour food preparations. Now, one only has to go to the supermarket to buy bottles of fresh juice and prepackaged defenseless arils, no messy seeding needed. The wider availability juice might be one reason we are seeing a surge of pomegranate products on the market. (I had several tasty pomegranate juices, sorbets and other products at the Fancy Food Show and was very taken with a Republic of Tea pomegranate tea. The tea’s box very prominently featured the Pom name and logo.)

To do it yourself, first pick a pomegranate that is heavy for its size. Then extract the seeds. My preferred way coincidentally happens to be the way the Pom people say to do it. Click over to Pom Wonderful's site to see photos of the operation. Basically, cut off the crown and score the outside hull into sections. Then submerge the pomegranate under water in a big pot or bowl. Break apart the sections. Still under water, rub the membrane off the seeds. The seeds will sink to the bottom and the white membrane should pretty much float. Spend the time to get all the membrane off at this stage. It is much easier now then afterwards. Then drain and strain and you have your seeds ready to use.

To be honest I’ve never juiced a pomegranate myself. I just love eating the seeds. But if you want to try here are two methods from ehow.com. The first is caveman style. Bash the pomegranate against a kitchen counter or other surface a few times, rolling it back and forth to release the juice. Then “puncture or cut” the pomegranate and squeeze the juice out. Blog Appetit is not responsible for any cleaning bills this method may incur.

The other method is to gather the drained seeds you harvested via the water bath and pulverize them in a blender or food processor, then strain the resultant juice through cheesecloth. (This is why I have always BOUGHT the juice.)

To Be Continued -- Part Two (Recipes)

Update: Click here for the recipes.
Posted by FJKramer at 9:11 AM