It's been a busy year at Blog Appetit.  My backlog of recipes and posts grew longer as my commitments to other projects grew.  A lot of my recipes reflected my interest in international Jewish cuisine (although you don't have to be Jewish to enjoy them).  Surprisingly for someone who doesn't bake all that much, a lot of my posts had to do with something sweet from the oven.

Here's some of what I thought was the best of 2010 from recipes and photos that did make it to the blog.  I look forward to 2011 and getting to publish some of the wonderful recipes I haven't had time to post yet as well as creating or discovering new ones. 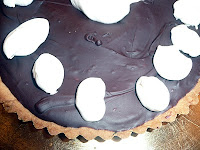 The winner for January was the wonderful chocolate tart I made for New Year's.  You can read the post and find the link to the recipe for Bittersweet Chocolate Citrus Tart with Jasmine Tea Scented Whipped Cream here.

From the post: "I rang the New Year in with friends and this bittersweet citrus chocolate tart from Alice Medrich's book Pure Desserts. The book should be called 'Perfect Desserts' because that's what this tart was -- the dark bittersweet chocolate offset by the grapefruit and orange zest and the wonderful jasmine-scented whipped cream just adding to the wild party in my mouth."

Other recipes from the month featured a sweet and sour baked fish and a slow-cooked chick pea and lentil soup.

Baby, it was cold outside and my blog featured recipes to warm you up, including some energy efficient baked apples. My favorite for February was a toss up between two noodle dishes -- a sweet noodle pudding and a savory pasta dish.  Far and away though, folks loved the sweet Cinnamon Bun Kugel from this post.


This kugel is better as a brunch dish or dessert than a regular entree.  Both it and my Baked Fidellos Tostadas with Sephardic Flavors are in the same post, so if you want to try the savory as well as the sweet, the recipe is there, too.  My friend Karen Bloom also shared some of her never fail kugel-making tips, so check it out.

The sweet kugel recipe was based on one developed by Nina Yellin, Karen's cousin, who has written a series of self-published cookbooks on kugels and similar dishes. 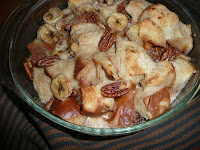 My New Orleans Bread Pudding wins by a nose over the baked chicken and bread casserole I featured in the same post.  Also included is a tasty recipe for a soup with winter squash, greens and bread. Perfect for the cold rainy weather we are having right now.

I end up creating recipes to use up bread all the time. It seems like I always have some extra crusts, slices and frozen hot dog rolls around. My favorite breads to use are challah or other rich egg breads for desserts and french toast or sturdy artisan breads for main courses or soups.

March also brought posts on a gluten-free Passover menu (including pistachio lemon bars) and two other Passover recipes, one for  Italian potato gnocchi, the other for a custard fried matzoh. 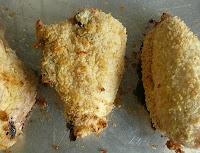 April is the month where I seemed to go for monochromatic baking -- black and white cookies AND whoopie pies. I also remember not being able to stop eating my honey butter caramel sauce and my Moroccan eggplant conserves (not together, though), but I think my favorite recipe of the month was my oven-fried chicken.

The chicken, which is oven fried without its skin, is juicy with a crunchy outside and is nicely seasoned with Middle Eastern spices.  I served it with a honey-mustard slaw (that recipe is also posted). The chicken also has one heck of a back story involving suspicions of drug dealing. For more on that and the recipe, click here.

This month I made my own ricotta cheese, yogurt and yogurt cheese.  The ricotta cheese all by itself was almost ethereal. I also developed some recipes suitable for new mothers and celebrated Cinco de Mayo. I also published my "History of Jewish Food" post, which has been very popular even if it doesn't have any recipes.

Probably my favorite recipe of the month, though, was the Pomegranate Molasses Sauce I used with the chicken kabobs in this post (which also includes a berry sorbet recipe).  It's easy, tangy yet sweet and totally wonderful. I find myself making it again and again as an accompaniment to many different savory dishes. 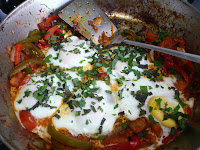 In June I wrote about the care and feeding of picky eaters, eating local and in season, reviewed the new cookbooks by Steamy Kitchen and Pioneer Woman, turned strawberries into strudel, a fruit soup, and a coconut strawberry vegan ice cream, and wrote up my experience at a Filipino cooking class at the Oakland Asian Cultural Center (with recipe for arroz caldo or lugao).

My favorite for the month, and a dish I made regularly now, is shaksouka, eggs baked on top a simple stew of tomatoes and peppers.  For the post I paired this North African speciality with homemade pita bread (recipe included in the post) that could be "time-shifted."  At home I usually just  mop it up with a hunk of good bread.  Plus I often toss in vegetable leftovers ranging from spinach to corn kernels. 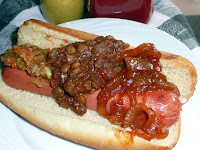 Opps. July was a month of work and travel and I only posted one recipe -- for my Tortilla de Espana made with potato chips.  It's tasty, festive and easy and I posted it in time for the Spain vs. Holland World Cup finals. (I never did get a chance to give the Dutch equal time with a recipe).  The omelet-like appetizer or light entree is a winner, as is Spain, winner of the FIFA 2010 World Cup. Sorry, no photo.
August also saw very few posts on Blog Appetit, but I had a lot of fun coming up with hot dog toppings reflecting various regional tastes.  Try my "New York Onions in Ketchup Sauce," Chicago-style "Homemade Pickle Relish, or my favorite,  "Phoney Island Hot Dog Chili," a vegan take on a Coney Island dog smothered with chili.  The chili is delicious on its own or top a regular or vegan hot dog with it.  The photo shows a dog dressed in all three toppings. 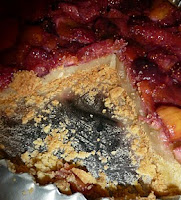 In September, I participated in Hunger Challenge 2010 through the San Francisco Food Bank to raise awareness of hunger locally and across America.  I wrote about budget food shopping, feeding a family on a food stamp allowance of $4 a person a day, featuring menus and recipes for kosher or organic families. You can read the Hunger Challenge posts with recipes here. I also posted a family standby recipe -- Chicken Enchiladas in a Hurry.

I attended and wrote up a presentation on memories of  the Jewish foods of Shanghai, including a sweet and sour fish recipe.  According to Google Analytics, this has been one of my most viewed posts of the year.  I found the talk interesting and the sweet and sour dish is not gloppy or overly sweet, but tangy and satisfying.

My favorite recipe of the month was a Fig-Almond Paste Tart in a Cornmeal Olive Oil Crust.  The crust comes together quickly and is just patted into place.  Purchased almond paste and a simply prepared fresh fig compote finish off the tart which was jammy, nutty and slightly sweet with a rustic crust. 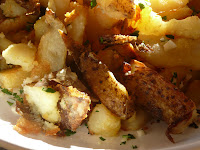 I did a round up of my assorted pumpkin and Halloween posts, tried to imagine what Abraham and Sarah might have served those three angels disguised as strangers, and posted the recipe that I believe helped the San Francisco Giants win their division, their league and eventually the 2010 World Series -- my oven-roasted garlic fries, a homemade version of the SF ballpark treat. 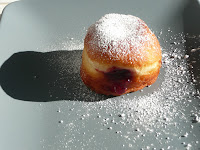 I featured a wonderful Greek chicken recipe with a pasta greens side dis and leek and mint fritters, reviewed Daisy Martinez's new cookbook as well as a number of new Jewish cookbooks (which post featured  a great potato knish recipe) and more, but for me my favorite recipe this month was the one for my jelly doughnuts. No contest. No discussion.  Go out and make some because you deserve them.  Be sure to share with your friends and neighbors because they deserve them, too. 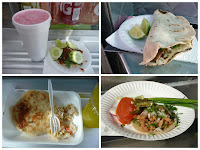 December brings me the ghost of recipes and photos past, ones I've been too busy to writing up and posting.
Perhaps I'll get an early start on my New Year's resolutions and post some of them before the year ends.   (This is the 90th post of the year, if you see any additional posts after that, I made good on my vow.  If not, well there is always next year.

Of the posts I did actually get up on Blog Appetit, I make grown up marshmallow-cereal treats (a riff on Rice Krispie Treats), share a pot roast recipe, develop a recipe for a baked noodle pudding that features some California crunch and adapt my favorite potato pancake recipe into "Shortcut Latkes."

My favorite post of the month isn't a recipe, but my exploration of the street food available from Oakland (CA) taco trucks.  While there are no recipes included in the post, I'm working on some recipes based on the tastes these trucks offer.  Look for them in 2011.
------------------
Have a favorite I didn't mention? Please leave a comment.  Are you a food blogger who's done your own round up? Leave a link in the comments so we can all take a look.
Posted by FJKramer at 4:52 PM

Thanks for the mention again!
Love the year in review!!!
Karen

Dear Karen,
Thanks for all your kugel and other inspiration.