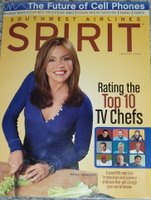 Just off the plane and hot off the press -- January's Southwest Airlines Spirit magazine rated the cooking divas in a process the author compared to a Miss America pageant. Points were awarded for causal ingredients (casual wear), provocative recipes (swimsuit), poise and presence on air (evening wear) , instructional talent (talent) and cookability of recipes (private interview). No Miss (or Mr.) Congeniality was named, and Joseph Guinto, the author, declined to list the names and vital stats of those who were not in the top 10.

Since that magazine's website doesn't have the article posted, here's a quick recap. Remember, Blog Appetit is just reporting the results, not determining them (or even agreeing with them)!

The Top 10 TV Chefs as Selected by Spirit Magazine

Number 10 was Rachael Ray, score 91.62. Yea: Casual ingredients and poise and presence. Nay: Less than provocative recipes; frozen spinach (Rachael was on the cover of the issue identified as a "multimedia mogul.")

Number 6: Tina Nordstrom, 102. Not as well known as many the magazine rated. She is Swedish and cooks outdoors for PBS. Possible extra points for being a blonde (you should read her write up), plus the recipe tested was an Apple Drink with Vanilla Vodka. Yea: Provocative recipes. Nay: Hard-to-find ingredients

And the number one TV chef according to Southwest Airlines Spirit Magazine: Jacques Pepin, 113.5 Yea: Everything, plus his accent.

Email ThisBlogThis!Share to TwitterShare to FacebookShare to Pinterest
Labels: On TV